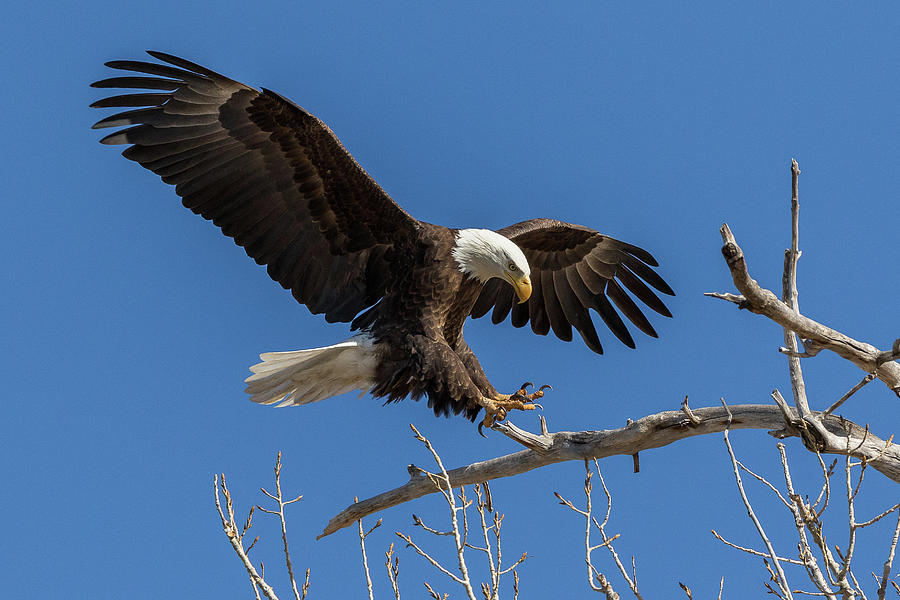 Bald Eagle at Touch Down

Bald Eagle at Touch Down

A Bald Eagle spreads its wings and extends its legs as it prepares to land in Jefferson County, Colorado. Bald eagles have been a spiritual symbol of Native Americans for hundreds of years. There were variations between tribes as to the eagles' symbolism but for most it generally represented bravery, wisdom, strength and courage. It was believed that the eagles carried prayers to the Great Spirit. Analysis indicates that Bald Eagle populations were as high as 500,000 in the lower 48 states before the arrival of Europeans. Adopted as the United States’ national symbol in 1782, there were only about 100,000 by then. Bald Eagle populations continued to decline in the 1800s due to loss of habitat and a corresponding loss of its prey. It was said to be at the edge of extinction in 1940 and that was followed by the introduction of DDT, a pesticide which further threatened the raptor causing its eggs to have very fragile shells. By the early 1960s, there were a mere 487 pairs of mated eagles in the lower 48 it was declared an endangered species. DDT was banned in 1972 and since then the Bald Eagle has made an extraordinary comeback, being removed from the endangered species list in 2007.

Congratulations on your feature in the Fine Art America Group "Images That Excite You!"

Tony, Congratulations on your feature in our group, Pure Nature Photography - celebrating the best of our natural world!